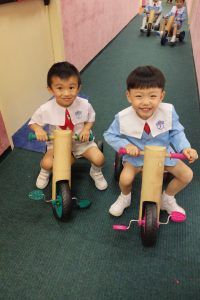 Funful has been emphasizing on the importance of Putonghua ever since the establishment of the Primary section, Putonghua has been the medium of instruction in Chinese Language. Our teachers have always explained to the pupils the reason for learning Putonghua. Teachers used to teach the pupils that after the handover in 1997, Putonghua would become a popular dialect. This has indeed become a reality. Hong Kong is now part of China, and china is becoming stronger and stronger. Putonghua is now an important spoken language. Even in the western countries, Putonghua learners are increasing at a very rapid rate. We are glad that our Funful children are starting to learn Putonghua at the Kindergarten stage. Not only can they speak fluently , their writing skill is also outstanding as a result.
Funful Group of Schools uses 2 languages and 3 dialects as the media of instruction in order to give our children a solid foundation for the future. Both Chinese and English are of equal importance. We have also achieved outstanding results in Speech and Music Festivals in the inter-school competitions.
We have often seen Funful alumni taking part in the secondary section of the Speech Festival. We are proud to say that Funful has made outstanding contribution in the promotion of Putonghua in Hong Kong.
Besides our academic achievements, we also teach our children to be caring and responsible citizens , taking up active roles in community services. These services include the Happy Bee, Junior Road Safety Patrol, Walk for Million, fund raising activities. Every year during the Lunar New Year, Funful children donate part of their red packets money to help those in need.